All this music industry talk, but not a lot of talk about the music itself. There will definitely be some “music music” talk coming soon, but in the meantime I want to share these AVGs (Audio/Visual Gems) that I found over at one of my favorite music messageboard forums at Weightless Recordings.

The first one is by Aphex Twin – the longstanding electronic music figurehead. Please be warned, the beginning of the video has a little mini-movie in it and it contains strong language. It is not for the easily offended. Once the music video starts, it gets incredibly trippy. Complete with Fred Astaire dance moves and Being John Malkovich sensibilities, “Windowlicker” is not messing around with your time. Or is it?

The second one is by Squarepusher – another electronic music guy. It blends old school meets new school of the video game world in which an 8-bit fighter craft coasts over colored spots that sync up with the music of Squarepusher. It views like Centipede meets Guitar Hero.

Thanks to Drew over on the Weightless forums for sharing these videos.

If you followed me from my Blogger page, then you might be aware that I collect vinyl records and other various pieces of music swag.  These days, I buy two copies of albums by certain indie artists; one to play, one to keep sealed that will hopefully go up in value.  It is amazing how things go up in value in such a short amount of time these days.  For instance, first pressing copies of MF DOOM‘s Operation: Doomsday (released January 1999 by Fondle’Em) has sold on eBay upwards of $100 starting back in 2003-2004.

There are hundreds of examples of this taking place, but I mention it to address one thing an artist should consider when having merchandise made for a certain project. We all know that making music can be costly and many of us just do not have the disposable income to have it made on a grand scale, especially when it is possible that the end result will wind up in your basement collecting dust if the stuff does not sell.

Depending on the situation, you may not attract the attention of enough people to sell off your quantity of CDs, t-shirts and/or other nifty knick-knacks in a short period of time, which is what we all want. I mean, who wants to sit around hocking the same old product for months on end? Of course, that does not mean you should not continue to sell the stuff over a longer period of time. While it may be attractive to skimp on the quality of the merch to protect your bottom line, I suggest you not do that if you are serious about your work. If anything, buy less quantity and bolster the quality of what you plan to sell.

Take it from your target consumer. As someone who gives his time and money supporting artists, I cannot tell you how much I hate buying a $15 CD-R from an artist. In fact, I refuse to do it anymore. Sure, the value of a thing is relative, but we all know CD-Rs are cheap to attain and they have a shorter shelf life than an actual professional CD. I know firsthand as I have a few CD-R albums that I bought in the early part of the 21st century that do not work now and have little in the way of scratches; they were just worn out play-wise. It just does not make sense to make someone pay for something like that. If you value your (potential) fans, then you should try to provide them with the best product you can muster. If that means you only press 100 pieces of vinyl that you have to spend $1000 to make, then so be it – sell it for $20+ and regain your investment.

As things in the world of music become more personal and intimate, it behooves you to care about your patrons. Look at it like market research, customer service and all the other things you expect a business to actively work on to give you the best product possible. Believe me, people do not mind supporting those that they like. There is a reason that iTunes has a profitable store option when they are so many ways to get the same music for free.

It is understood that you want to find a way to make money somehow and you may have little funds to make it happen. Well, here is me hoping that you take the following suggestions to heart when you get ready to prepare material for your next release:

Now this is not groundbreaking advice. In fact, Trent Reznor touched on this in his thoughts on what to do as an unknown/new artist. I am just trying to drive home the point. In the brave new world of the music industry, relationships are a premium these days. You would be wise to recognize that and behave accordingly. Do not cheap out on your (potential) fans. If you cannot invest the time and energy to create the best product you can muster, then you probably are not cut out to make a career as an artist.

And you should note the image above of a recent eBay auction of the aforementioned MF DOOM album. How cool would it be to see your projects being resold for a higher value well after the time you sold it originally? That is a true sign of validation, don’t you think so?

I came across this video on my old stomping grounds, the Soulstrut.com forums. It is an interview by modern hip hop vanguard Edan. Yep, I said it – VANGUARD. Edan is something like a visionary genius. He finds ways to paying respect to the old while being able to sound really new when he makes music.

Anyway, check out the entire interview, but Edan talks about what he is trying to get his circle of rap friends to start to focus on around nine minutes into the interview. You can just jump to it, if you don’t have 15 minutes to kill. We both know that is a lie, but suit yourself.

I agree with that one random nugget by Edan so much that you can expect a written piece exploring this under-served avenue in hip hop very soon.

The link to learn more about Edan is up above if you missed it. Edan has a podcast, aptly titled “Edan’s Radio Show.” The links below will send you to where you can listen to it. You might be able to find it on iTunes, but I haven’t validated that yet. The music selection is quite excellent if I do say so myself.
Episode 1 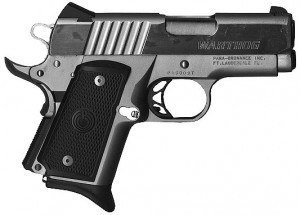 I am not a gun guy.  I hear rappers talking about them all the time though.  Using the “gun talk” references from many rappers, I am going to make an analogy of sorts regarding the record industry.

If the Big 4 major labels (Universal Music Group, EMI, Sony Music Entertainment, Warner Music Group) were guns, they would be some sort of machine gun like a Tommy Gun or an assault rifle like an AK-47.  In this piece, I would like to use the Tommy Gun analogy as I feel like that is the best imagery of their current effectiveness.  Think about it – you’re watching a Prohibition-era movie with the bad guy slinging a Tommy Gun rapidly firing in the general direction of the police.  The bad guys hits a couple officers, but he rattles of 100 rounds and only 3 out of 20 die.  As this is a movie of course, the bad guys always lose eventually. It is a bit ineffective, if you ask me, much like the major labels today.

Now independent labels are handguns. The heavier the acts they carry, the higher caliber of the gun they use. They do not shoot as much, but in the hands of a marksman they can be deadly with fewer shots. Much like Eddie Murphy’s characters in the infamously hilarious scene in Harlem Nights.

Yep, much like that. Arsenio & Company are the major labels and Eddie Murphy is an indie label. In today’s music climate, the labels that will succeed are the ones that actually have a real connection with their consumer base. The major labels may have the luxury of having large amounts of capital to market their “products,” but their consumers tend of only know of the product not where it is derived. I doubt in a poll of 100 people could more than 3 people tell you what label the Black Eyed Peas were on; even though, they have the #1 single in the country. Heck, I actually care about that kind of stuff and I barely know.

You may not tend to care about labels, but you should when it comes to music. Here are a list of .22 caliber and even Glock 9mm pistols that are firing some deadly shots these days:

Rhymesayers Entertainment
Rhymesayers is the label that pays acts like Atmosphere, Blueprint (check out the blog feature I did on him) and Jake One.

Stones Throw
Stones Throw is the label that pays Madlib, J Dilla and various private label funk re-releases. The recent “sonic boom” for them may be the release of the Mayer Hawthorne album though. Keep your eyes open for Stones Throw (always).

Ninja Tune
What doesn’t Ninja Tune do? With 4 sublabel imprints in tow, Ninja Tune always has something choice on deck from Spank Rock to Kid Koala.

Merge Records
This Glock 9mm has released some of my favorite indie rock records. Get familiar. They still put out good product today.

Matador Records
Just like Merge Records, killer records have come out of Matador and they continue to do so.

What are some of your favorite indie labels?

One of the first things I learned in one of my Introduction to Public Affairs-type courses at James Madison College was the textbook definition of “liberalism.” For the longest time, I identified as one, so it amazed me was how American media had bastardized the academic concept and came up with “Liberals” (with a capital L) to be one of socialist leanings. All my life, I considered myself a Liberal, which I was due to social construction. In learning about actual liberalism, I realized how true it was to my own personal identification.