Okay, there is a pink elephant walking up and down Woodward Ave. I am tired of everyone seeing it and acting like it is not there.

I may be hyper-sensitive to this as I have been engaged in our scene in various capacities for quite some time now. With my current focus/contribution, I pay a lot of attention to how innocent bystanders respond to our desire to gain their attention. When I say I pay attention, I literally the study reactions and keep written record of them. I am comparing numbers, making charts and developing theories to test in future instances.

Now I see a lot of attempts to get the attention of people. People try all sorts of methods. Some beg almost to the point of nagging; some just pose like they are cooler than they are and front their way through it. Either way, it is as if folks think people are stupid. It is kind of disturbing.

We are living in crazy times right now. It seems like we are losing folks, left and right. Whether it be moving away from their hometown or just general life events, our numbers around Detroit are dwindling. The interest in hip hop in general is weak. Nothing exciting is going on, but we continue to yell about stuff like it is going to change things.

What I am calling for is a true recognition of the situation in your hometown. I am asking that you think about what it probably looks like to someone that is not like you.

I have written a lot here, but I mean this in the most serious way. The negative bursts need to cease. It looks bad, very bad.

Again, do what no one has done, teach the youth. There is a strong core of new talent that could use some seasoned guidance. If you do not know of any, I could give you some referrals.

The course of negativity needs to be reversed. It is getting annoying. If only shit comes from the top, what do you expect to sprout? Especially considering nothing is really being planted to replace whatever fruit gets picked.

I am currently looking to expand things here at Frying in Vein in order to reach a broad audience. There are many that do not read. Certainly, there are many that hate the internet, so I am looking into new ways to spread my message to those that still need to hear what I say here.

That said, I will be blogging about the developments of a new podcast and a dedicated video blog in the near future. Frying in Vein swag will also be in the works as well. For the offline set, I have started on a book that kind of plays off of the advice I give on this site.

It is all about the now though. I was recently given the opportunity to join an affiliate program for a music download site called Dancetracks. Consider this my full disclosure. If you click on the link below and purchase the track(s), I get a cut of the proceeds. The cool thing about this site is that their MP3s are DRM-free and you can even buy WAV files for you snooty DJ types that don’t want your bang compromised.

To start, I am going to highlight the latest release of the J Dilla discography – Dillanthology Vol. 3 out now on Rapster Records. Expect when I share new music that if you see the Dancetracks player that you can help me continue to provide quality material to you by clicking through and supporting.

Ever since I decided to provide practical advice to creatives, I have been on a hunt for folks like myself. In my search, I have come across a few cool people, most of whom have even cooler blogs like Refe at Creative Deconstruction and Justin at Audible Hype. I have also found a lot of posers, jumping on the social media bandwagon to sell “virtual snake oil” to unknowing creative types. They push their 15,000 Twitter followers or random viral video success that was probably generated by video-replay bots built by $5/hour programmers in India.

Out of all that I have found so far as career types in the music industry, it is interesting to me that there are so many that present themselves as a resource for artists, but they do not offer the proper understanding needed to master their material/tool/servuce. It makes you wonder if they even really understand what it takes to market a product successfully.

I am finding for every three (3) capitalizing music industry hack, there is one (1) genuine person that actually wants to help artists in order to have long-term clients and not just make a quick buck. The author of the featured piece is one of those genuine types. I have been able to witness this person’s passion firsthand at the New Music Seminar in Chicago as she kept questioning the habit of industry vets using industry speak that paying patrons didn’t likely understand. Getting to speak with her afterwards, I found she was really and willing to actually share the real advice people were seeking.

Ariel Hyatt is the founder of Ariel Publicity & Cyber PR a New York based digital firm that connects artists, authors and filmmakers to blogs, podcasts, Internet radio stations and social media sites. She, in conjunction with leaders in the new media space for the music industry, put together a list to combat a lofty one put out by Billboard on what it take to get “maximum exposure” in music today. Essentially, her INDIE MAXIMUM EXPOSURE LIST (A GUIDE FOR THE REST OF US) is a practical list of things anyone should consider when trying to build a business. If the message should be anything to artists is, there is a lot of work involved in the process to building a sustainable fan base. A music can no longer take their fans for granted.

I have only gotten through the first 20 pages and I am deeming this guide a must-have. Study the advice and commit it to memory. They should create an audio book of the document. Seriously. When you begin to devise a plan for your next creation, keep the importance of sweat equity in mind.

That is all, folks. Get back to work. This post has pushed me to do a piece on the necessity of PR in any music brand’s success. Stay tuned for that.

“I came through the door, I said it before” content is king (Rakim, “Eric B. is President” 1985). As someone that still buys CDs and vinyl records, I tend to expect a little more now with my purchases since I know they are so easy to make. If I can fabricate your CD, then there is a good chance I really don’t want to buy it. That does not mean I will not, good friend of mine. I just wish you took a little more time making something that I can justify keeping on the shelf that inevitably collect dust on a mantle somewhere.

I featured the latest video from People Under The Stairs on here and I just got their new album in the mail. Come check me out as I open my new collector’s item.

Let me clarify, PUTS have been putting together clever merchandising arrangements since way back. They understand the value of “limited edition.” The first single off their new record was only available on vinyl and there was only 500 copies made. The Stepfather album had the first “fan club” write-in program that I have seen since the early 90s, along with other hidden gems all over the CD/DVD project. I cannot forget my die-cut 10″ single of “Tuxedo Rap (remix).”
Along with PUTS, there have been many others that have put together really cool packaging and accompanying swag to go with their music projects. Hip hop is no stranger in that regard. It is just surprising how little it happens though. See this post as a “call-to-action” for artists to spend more time on what they plan to sell to their fans.

Look to acts like People Under The Stairs or Nine Inch Nails for guidance on how to create interesting merchandise that people are willing to buy. The more effort you put into your work, the more you can feel confident charging your fans to buy it. Oh, it helps if what you sell them will increase in value over time too. *wink wink* Here are some suggestion bullets to focus on:

I will elaborate on this some more in a future piece. I am more interested in finding more music artists that are putting out cool merch for fans to collect. PLEASE SHARE YOUR FAVORITES IN THE COMMENTS.

I am from a fancy place called Detroit. You may have heard about it. Probably nothing good, unless you were getting the info from places like here, Positive Detroit, Detroit Moxie, Urbane Reflections, Ren Soul or somewhere like that. Regardless of all that, I wanted to continue to do my part and showcase the good stuff that has made Detroit cool in a lot of places not surrounded by the Great Lakes, namely its music. 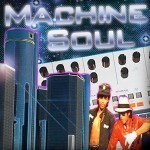 Detroit has some of the world’s greatest DJs. There, I said it. I would bet we have more touring DJs than any other region per capita, just based on from the techno scene alone. That is why it brings me great pride to share this Detroit-inspired mix done by a guy that used to go by DJ Phizyx. Now he just goes by Kevin. Shared by our good friends that make the Hello Friends Podcast, here is Machine Soul – DJ mix by Kevin. Check out the tracklisting in the JPEG. 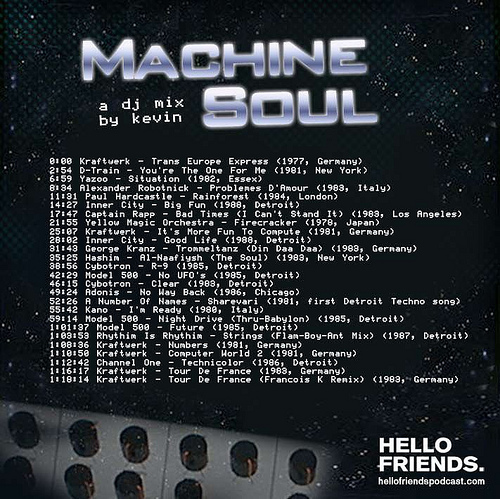