It has been a long time coming, but it is finally a reality – FryinginVein.com is now in business as Frying in Vein (FiV) Music Business Services – a SorSaw Enterprises, LLC company. Please excuse the dust. There will be active changes being made in the coming weeks as we get comfortable with the new setup.

Major thanks goes to Chris Genetti aka @draconum for the theme re-design. He is not just great with web design; he is also pretty handy with producing electronic music. Ask him about it.

If you enjoy the lovely background image, then you will be interested to know that it was designed by Andrea Williams of &rea Designs.

There is a lot more to come, so take a look around and make sure you stay tuned in however you like!

It has been a while since I did a serious artist feature. The main reason for that is I am really picky about which artists I choose to discuss, because I do not consider myself as just a music blogger. I do not want my reading audience to be confused with the content as I know we naturally want to categorize things in definite spaces. The thing is, this site gets okay traffic and if I want to do my part in helping an artist succeed, it makes sense to talk about them here. That said, I recently had my sensibilities piqued by a wonderful music upstart from NYC. Meet Hesta Prynn. 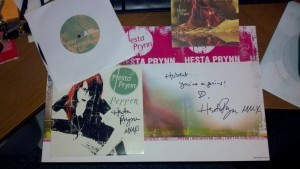 It's not often that someone says I'm a genius.

Miss Prynn first fell on my radar, thanks to Vince Speelman at Curve. By his recommendation, I explored her website and noticed that she had a very up-to-date focus on her work. Everything that I suggest to my artist friends, like having a prominent form to collect data from new fans and an easy-to-navigate user interface (UI), was on her site. Then I dug even further and found that her site at the time was powered by Topspin. If you don’t know, Topspin is the high-end software for artists that want to build their music empire with direct-to-fan (DtF) capability and the ability to track usable data. Eminem uses Topspin. Paul McCartney uses it too. Your friend’s garage band is not likely to be able to afford it, unless he knows someone. It was then I realized that Hesta was either really connected or she had quite a bit of funding behind her. Come to find out it was the former.

At a recent show headlined by the band Bear Hands at PJ’s Lager House in Detroit, I had the chance to not only see Hesta Prynn live, but I was able to meet her and talk shop with you in regards to her career.  First off, I really dug her stage show (although the sound was a bit of bunk), but my conversation with her was the game changer and sold me as a fan. I was impressed by her business savvy and her desire to succeed. It is not often that I get to witness the blend of talent and commercial knack in a music act. Usually, you find a band that is really talented, but to get the commercial success they have a separate non-band member that really handles all the business dealings. Said band never really seems to understand the 5Ws of their situation, as in they could not replicate if they were put to task. Miss Prynn has a manager, but I think if she wanted to manage another act, she would be quite good at it. Again, that does not make her a better musician, but it is an awesome skill to possess on top of great keyboard and production skills.

In my conversation with Hesta, I let her know that I would like to help artists become more business savvy and upon hearing that she put me to task to tackle an issue she had on her mind. While I will not explicitly state what her issue was, I can say that she was looking figure out how to create product for a demographic that was really new to her. After much prodding, she finally got a quality suggestion out of me, which led to the autographed poster that you see here.

Right now, I have realized I have typed quite a bit. I want to stop now. Do me a favor and check out hestaprynn.com. From my talks with her, she is getting ready to ramp up her engagement with her fans, much like her recent Black Friday Book Club promotion. Officially, she is one of my future “artists to watch.” You heard it here, but you can google her and find support of my statement.

This is one way on how you are to gain a fan.

The other day was just like any other day. I was on Twitter witnessing a lot of brain dumping and reckless statements. Per my usual, I would humor some of it with a response. On this particular day, I was having a discussion with Burn Rubber Sneaker Boutique and rapper Roland “Ro Spit” Coit about something he said, which led me to the following tweet. 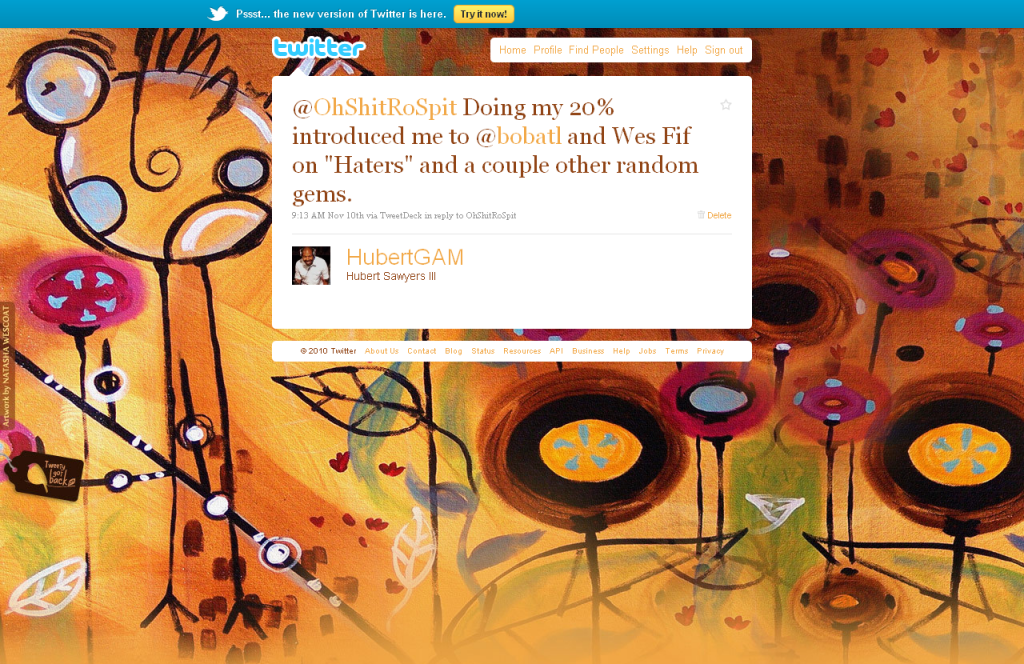 No big deal, right? Of course not, I am just talking with my friend about music and the business of it. When out of the Twitter blue comes this: 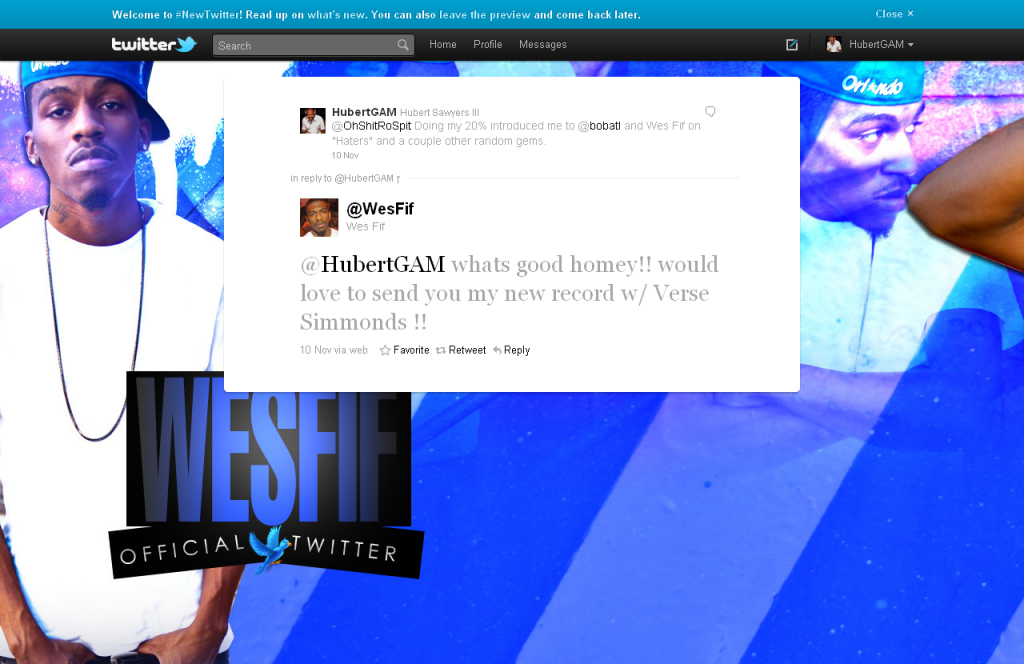 Now you may look at this and say, “So?” My response to you would be, similar to what my Mother’s Mother would say in such an instance, “Child, bless your heart,” for you know not of a ground-breaking moment this is. If you remember me bitching about rappers, then you know I think they are the greatest spammers on the planet.

One of the biggest problems with spammers is that they don’t LISTEN. If you read this blog, then you know it’s a secret to success. That is why when an artist, who I do not have a personal relationship, actually responds to something I say in reference to them, a feeling of deep appreciation befalls me.

NOTE: I did not directly mention the artist Wes Fif. Honestly, I had no idea he was still working on music, let alone aware he had a Twitter account! Mind you, Wes was not following me originally, so he had to have used another application to alert him to my mention of him. And for that, I salute him!

Of course, I wanted to let him know that I appreciate what he did, but I wanted him to know I am not down with spam. That is when he replied accordingly. 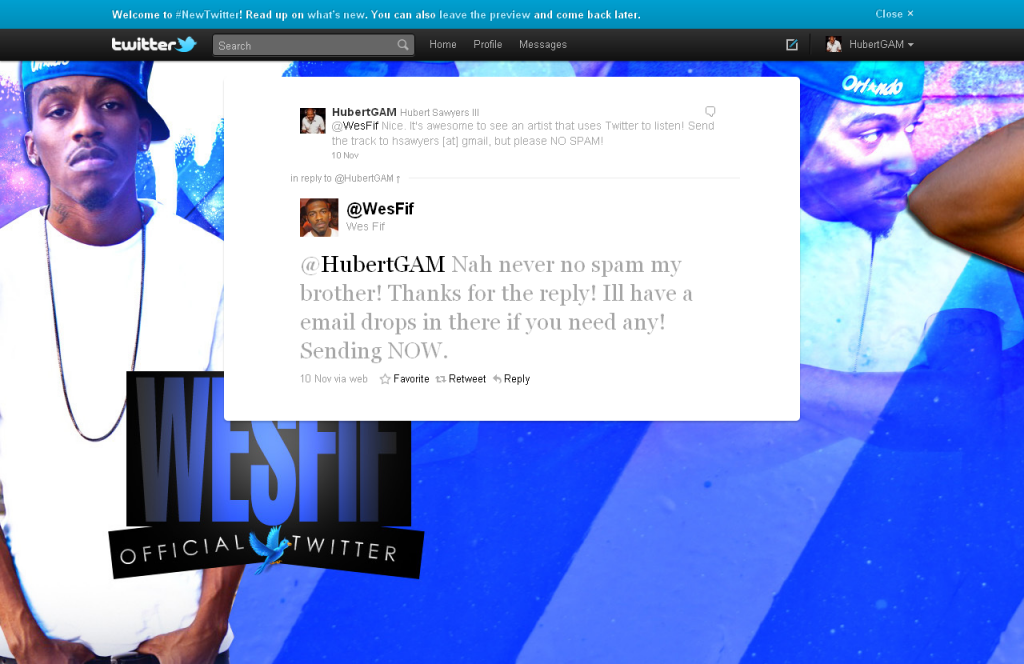 Moments later, Wes Fif’s latest single featuring Verse Simmonds made it into my mailbox and guess what? I actually listened to it, unlike many unsolicited tracks that are sent me to daily. Now this song is not exactly my cup of tea. In fact, I find that it relies too much of the “ATL nuance” in the production of it, but I still support Wes for his ability to see an opportunity and make the best of it.

With that, I give you Wes Fif’s new single “U Do Me” featuring Wes Fif.

[audio:http://fryinginvein.com/wp-content/uploads/2010/11/Wes-Fif-feat.-Verse-Simmonds-U-Do-Me-Dirty.mp3|titles=Wes Fif feat. Verse Simmonds – U Do Me (Dirty)] 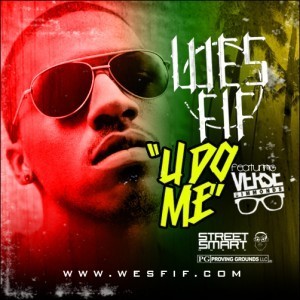 Moral of the story – LISTEN. You might find a new opportunity.

This is late getting posted. In fact, hip hop artist Tasherre D’Enajetic beat me to the punch in a “student-schooling-teacher” instance. One of these days, I will share why “being first” is quite the asset. Key Takeaways Music is not unlike any other thing on this planet that people are trying to make money off of. Embrace the change that the Internet has brought forth. Ask your fans what they want and provide them value, instead of doing what you want. Make sure your product is good. Focus on what you do best. Whatever you don’t do well, look to get help. 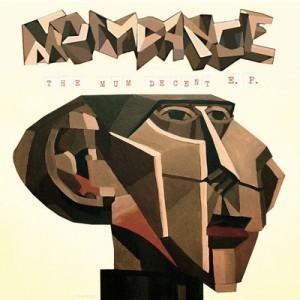 It has a been a while since I shared an audio-visual gem. While on The FADER blog looking for a random band, I ran into this crazy thing by Mumdance and Esser. It is delightful and tasty. Enjoy!

If you enjoy this song by Mumdance, please purchase his new extended player. The image below will direct you to it on Amazon (affiliate link, support your helpful blogger!)