I posted a fourth music industry “secret” on Music Think Tank, which is a music community resource for news, marketing tips and other relevant information. The fourth “secret” is Have Integrity. Give it a read, leave a comment and share it.

While you are on Music Think Tank, poke around and read some of the posts on the main page. That is where I found the post by Michael Brandvold that inspired the 7 Reasons to Build Your Own Music Website. If you have music that you want to try and get more exposure, they have a place where you can post your music. The site has a little something for everyone that is interested in the world of music.

Enough about that though. 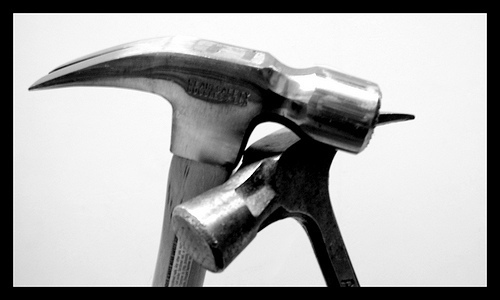 When this posts, many of us will be contemplating how to make the new year better than the last. If you fall into this subset of humans, consider this anecdote provided by Eric Galen of Music180. In dropping “The Science of Becoming a Rock Star,” he shares a lesson he learned from his college professor on how one could tap a stick of dynamite with a pencil a thousand times and nothing will happen, but one blow from a hammer will make it explode. Instead of doing a bunch of little things to try to achieve a bigger result, consider what one big thing you could do to reach a greater goal. Galen sums it up best here:

To take your career to the next level, you’ll save time and money – and increase your chance of success – by focusing on the hammer and ignoring the pencil. Figure out what next step will have the biggest impact on your career, and concentrate your time and money on that.

With that, I deem 2011 is Hammer Time in every which way it can be viewed. Let’s all be a bit smarter about how we spend our time, so we can leave room to review, repair and retry if need be. In the meantime, let Hammer himself inspire you into the new year.