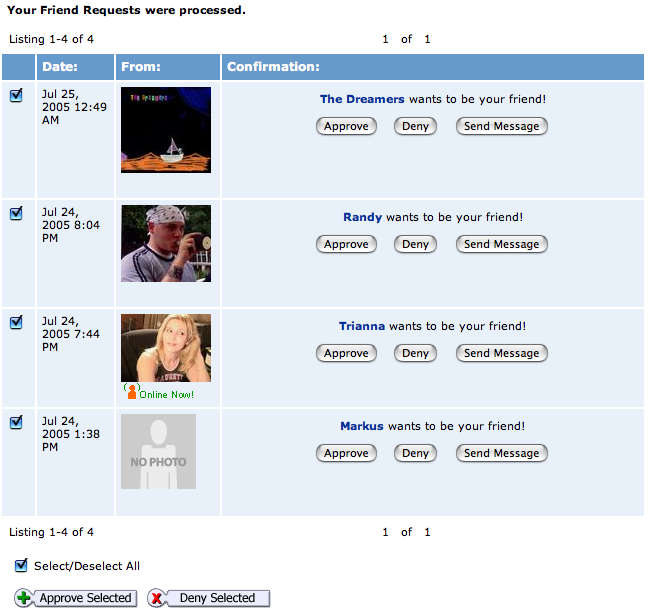 It does not make much sense why I still have my MySpace profiles (all three of them). It is not like I use them anymore. I check them occasionally to remind me why I stayed away for so long.

Yet it was only the other day when it hit me what bothered me most about the once-popular social networking website. As I look at my “friends” on MySpace and I notice that 70% of them are artists themselves; most of them being hip hop acts. At one point, I was get 4-5 requests a day from rappers and producers to check out their music and cop “their hotness.” Whenever I would post promotional bulletins, they were only being acknowledged by those involved with the event, never non-industry people.

Sure, it was me that accepted all these artists, but I do remember being quite discriminatory for a while until I just got bored with the practice. At some point, I just did not feel that the time I was investing on the site was merited by the dull results I was getting. That was when I decided to get my OWN space like you see here. Granted, I still did not know what I was doing, but I knew it had to have been better than my MySpace work. I must say it was the best move I have made in quite a while. My presence is stronger than ever and when I finally get the second phase for Frying in Vein going [which is very soon], I am certain I will see respectable results.

While preparing for this piece, I had to get some perspective from some of my comrades. I knew my incendiary headline was just that, almost to a level of absurdity. The site is still buggy and loads like cold molasses on a lumpy surface with a 15 degree incline, but it is still kind of necessary to have. In terms of owning your brand on the search engine, MySpace always ranks high, so it came as no surprise when my friends were not as supportive of my baseless accusation.

My dude Ethan Holben aka DJ Contakt, former VP of Fat Beats Records, gave me some perspective over e-mail that drills the point home. My issue with rappers has nothing really to do with MySpace. The truth of the matter is, the reason why the content of this site has taken the direction it has is due to what Ethan says here:

(edited by me)To me, the problem with Rap and Myspace is GENERALLY ( I capitalize, because it is a generalization and isn’t true for everyone) the same is the problem with Rap and everything else. The importance of self promotion in rap has always been there, it’s part of the framework of the music and the culture. However, there was a turning point where it went from being a necessary part of the culture to a comedic parody of itself. I can’t pinpoint when this turning point was (maybe the indie movement in the late 90’s, or perhaps the rise of the 50 Cent style “mixtape” in the early 2000’s) nor can I give you the exact cause, that is an entire article in itself – however it did happen. There was a period of a few years when you couldn’t have a conversation with a rap artist that didn’t have the use of the now cliché phrases “grinding”, “on my grind”, “hustling”, “do my thang”, and all the variations at least once, if not ten times that. To me, Rap became obsessed with blatant self promotion, to many, that blatant self promotion appeared to be more important than the quality of the art. This obsession with “hustle” is essentially the opposite of building a “true fanbase” like your prior article. When you “hustle” you aren’t treating people like peers, you are selling to them and in essence creating only a fleeting transactional relationship.

When you “hustle” you aren’t treating people like peers, you are selling to them and in essence creating only a fleeting transactional relationship.

When I advocate being a personable geek, I am telling you to care about who you seek to buy your stuff. For the longest time, folks have gotten away with this one-way arrangement of doing things and people are no longer accepting of it. THAT is why MySpace has died – too many stupid people, who do not understand that they are not special. You are not adding value to someone’s life by having “the hottest beats on Earth” or “the Dylan fire of 16” bar verses. I mean, you might to someone, maybe. You are never going to find that person if you are adding to a thick fog of spam though. You need to get a personality; something that will make you stand out from the pack.

Seriously folks, wise up! Stop jumping on every social networking site because you see a fake 50 Cent account with over 100,000 followers. You will never be 50 Cent by following. 50 Cent became who he was by being a leader in the hip hop space. His mixtapes changed the way we ingest rap today. The man does not care to jump on trends. He is still trying to recreate his best record! That is why he is rich.

If you must use MySpace, try to really connect with folks. Now that they have analytics, explore how a tweet to your MySpace can affect the amount of plays per day. See if integrating the same status messages across the same platforms is actually advantageous to you. Do your research, different demographics use different sites. It is true. You probably will not have the same friends on MySpace as you do Facebook. This is how you must think when using these TOOLS. These sites are not toys, so stop playing with them. Either get serious or quit.

Sorry… but this gets me a little riled up. Thanks for reading.